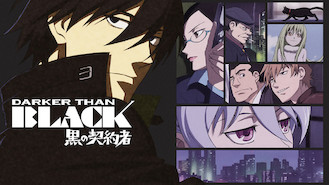 Not in Switzerland but still want to watch Darker Than Black?
No Problem!

The vast drama of this intricate anime series begins when a strange area -- dubbed Hell's Gate by the locals -- suddenly emerges to transform Tokyo. A spacial anomaly. A freakish breed linked to a false star system. Welcome to the new world order of the occult.