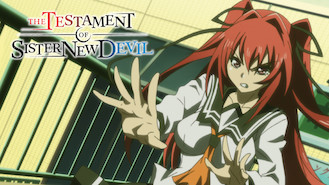 Not in Switzerland but still want to watch The Testament of Sister New Devil?
No Problem!

The Testament of Sister New Devil

Basara hails from a clan of heroes, but when his father suddenly remarries, he finds himself living with a family of demons. So these two sisters are descendants of the devil? It's fine. No big deal. They're his family now.