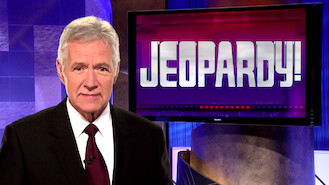 Not in UK but still want to watch Jeopardy!?
No Problem!

Alex Trebek hosts one of TV's longest-running game shows, where a trio of players buzz in with their knowledge of history, arts, pop culture and more. The category: Game Shows. The clue: "This popular quiz series requires contestants to answer in the form of a question."